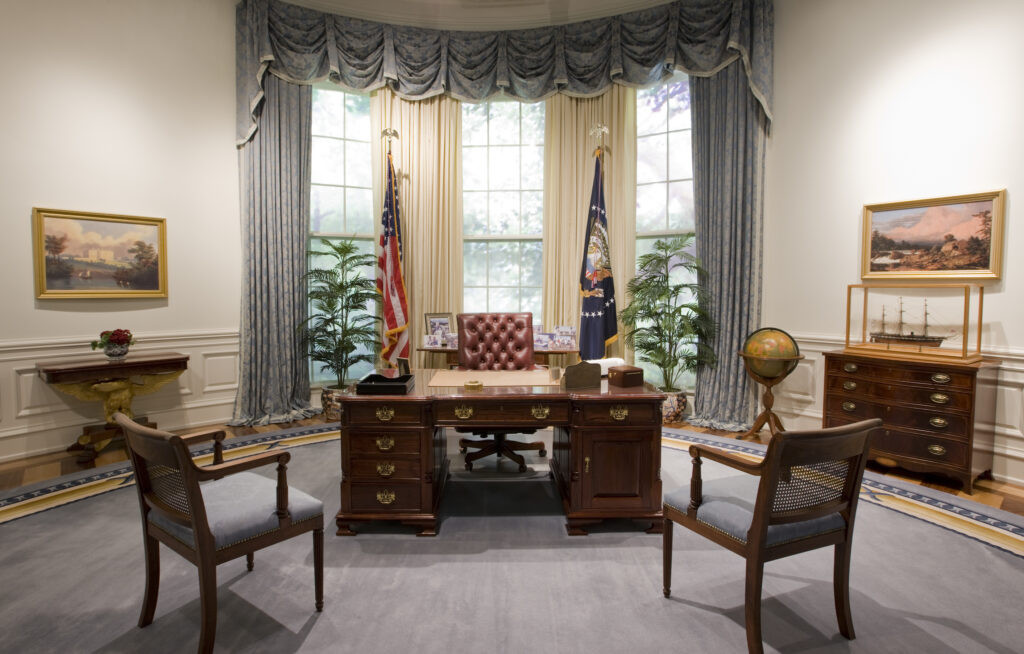 Discover secrets and surprising stories of the US Presidents during a special program from Mentor Public Library.

Which president would notoriously sleep during Cabinet meetings? Which first daughter would smoke on top of the White House and put tacks on politicians’ seats?

Discover this and more surprising stories from US Presidential history during an online program we’re hosting at 6:30 p.m. on Wednesday, July 14.

The speaker will be Susan Cannavino. Her talk is free, open to all, and will be hosted via Zoom. Registration is required and people can sign up online or by calling us at (440) 257-2512.

By the way, we’ve hosted several talks on presidential history, many of which can be viewed in their entirety on our YouTube channel, including:

Has any president in US history been inaugurated under such fraught circumstances as Lincoln? States had already begun seceding from the Union. With his first inaugural address, he hoped to avoid a war. So what exactly did he say and what did he mean?

This session of our Civil War series is led by Todd Arrington, the site director at Garfield National Historic Site.

Our Civil War series continues next month at noon on Wednesday, April 14. Arrington will return to discuss the history of the Grand Army of the Republic, the predecessor to the American Legion, VFW, and other veterans groups. The talk will be hosted via Zoom. Registration is required, and you can sign up on our website.

Finally, if you’re interested in Civil War history, several talks in our Civil War series can be viewed online in their entirety, including:

The Connection between President Eisenhower & Gettysburg

President Eisenhower had a special relationship with the town and famous battlefield of Gettysburg, going back to his days in Camp Colt. Learn about it here from Todd Arrington, the site directory for the James A. Garfield National Historic Site. (You can also learn about Arrington’s connection to both Gettysburg and Eisenhower.)

Our monthly Civil War series with James A. Garfield National Historic Site continues at noon on Wednesday, Nov. 18. The topic will be President Lincoln’s contentious and close reelection campaign of 1864. The talk will be hosted via Zoom. Registration is required. You can sign up online or call us at (440) 255-8811 ext. 247.

In the meantime, you can visit our YouTube channel for more programs on our nation’s history. We have lectures on both President Eisenhower and the Battle of Gettysburg that you can watch at your convenience.

Our Leaders & Legacies of the Civil War series continues with a look at the role that Civil War generals played in the Indian wars. Ranger Alan Gephardt of James A. Garfield National Historic Site specifically examines the actions and opinions of Generals Philip Sheridan, William Tecumseh Sherman, Winfield Scott Hancock, and Ulysses Grant.

By the way, the Civil War series with our friends from Lawnfield continues during a special online program at noon on Wednesday, Oct. 14. The topic will be the special relationship between Gettysburg and President Eisenhower. The talk will be hosted via Zoom. Registration is required, and you can sign up on our website.

By the way, if you’re interested in Civil War history, several talks in our Civil War series can be viewed online in their entirety, including:

The Assassination of Abraham Lincoln

No presidential assassination is inconsequential, but Abraham Lincoln’s murder was a pivotal moment in our nation’s history. It set the tone for the lengthy and contentious Reconstruction Era – though perhaps not the way in which his assassin, John Wilkes Booth, and co-conspirators intended.

Learn all about Booth, his conspiracy to behead the Union, and Lincoln’s final hours from the experts at James A. Garfield National Historic Site. You’ll discover:

Our Civil War series continues at noon on Wednesday, May 8, at our Main Branch. We’ll learn about the Fourteenth Amendment. As always, the talk is free and open to all.

By the way, if you’re interested in Civil War history, several talks in our Civil War series can be viewed online in their entirety, including: