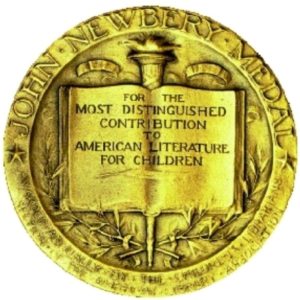 The Newbery Medal was named for eighteenth-century British bookseller John Newbery. It is awarded annually by the Association for Library Service to Children, a division of the American Library Association, to the author of the most distinguished contribution to American literature for children.

2017: The Girl Who Drank the Moon by Kelly Barnhill

2015: The Crossover by Kwame Alexander

2014: Flora and Ulysses; the Illuminated Adventures by Kate DiCamillo

2013: The One and Only Ivan by Katherine Applegate

2011: Moon Over Manifest by Clare Vanderpool

2010: When You Reach Me by Rebecca Stead

2009: The Graveyard Book by Neil Gaiman

2007: The Higher Power of Lucky by Susan Patron

2004: The Tale of Despereaux: Being the Story of a Mouse, a Princess, Some Soup and a Spool of Thread by Kate DiCamillo

2001: A Year Down Yonder by Richard Peck

1996: The Midwife’s Apprentice by Karen Cushman

1993: Missing May by Cynthia Rylant

1988: Lincoln: A Photobiography by Russel Freedman

1987: The Whipping Boy by Sid Fleischman

1985: The Hero and the Crown by Robin McKinley

1982: A Visit to William Blake’s Inn: Poems for Innocent and Experienced Travelers by Nancy Willard

1981: Jacob Have I Loved by Katherine Paterson

1979: The Westing Game by Ellen Raskin

1978: Bridge to Terabithia by Katherine Paterson

1973: Julie of the Wolves by Jean Craighead George

1971: The Summer of the Swans by Betsy Byars

1969: The High King by Lloyd Alexander

1968: From the Mixed-Up Files of Mrs. Basil E. Frankweiler by E.L. Konigsburg

1965: Shadow of a Bull by Maia Wojciechowska

1963: A Wrinkle in Time by Madeleine L’Engle

1961: Island of the Blue Dolphins by Scott O’Dell

1959: The Witch of Blackbird Pond by Elizabeth George Speare

1958: Rifles for Watie by Harold Keith

1955: The Wheel on the School by Meindert DeJong

1954: …And Now Miguel by Joseph Krumgold

1953: Secret of the Andes by Ann Nolan Clark

1950: The Door in the Wall by Marguerite de Angeli

1949: King of the Wind by Marguerite Henry

1943: Adam of the Road by Elizabeth Gray Vining

1942: The Matchlock Gun by Walter Edmonds

1941: Call it Courage by Armstrong Sperry

1934: Invincible Louisa: The Story of the Author of Little Woman by Cornelia Meigs

1933: Young Fu of the Upper Yangtze by Elizabeth Lewis

1931: The Cat Who Went to Heaven by Elizabeth Coatsworth

1928: Gay Neck, the Story of a Pigeon by Dhan Gopal Mukerji

1927: Smokey, the Cowhorse by Will James

1926: Shen of the Sea by Arthur Bowie Chrisman

1924: The Dark Frigate by Charles Hawes

1923: The Voyages of Doctor Dolittle by Hugh Lofting

1922: The Story of Mankind by Hendrik Willem van Loon 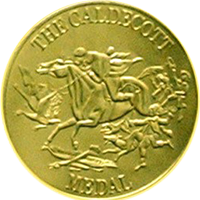 The Caldecott Medal was named in honor of nineteenth-century English illustrator Randolph Caldecott. It is awarded annually by the Association for Library Service to Children, a division of the American Library Association, to the artist of the most distinguished American picture book for children.

2021: We Are Water Protectors by Carole Lindstrom; illustrated by Michaela Goade

2020: The Undefeated by Kwame Alexander; illustrated by Kadir Nelson

2018: Wolf in the Snow by Matthew Cordell

2016: Finding Winnie: The True Story of the World’s Most Famous Bear by Lindsay Mattick

2015: The Adventures of Beekle: the Unimaginary Friend by Dan Santat

2011: A Sick Day for Amos McGee by Philip Stead

2010: The Lion and the Mouse by Jerry Pinkney

2009: The House in the Night by Susan Swanson

2008: The Invention of Hugo Cabret: a Novel in Words and Pictures by Brian Selznick

2004: The Man Who Walked Between the Towers by Mordicai Gerstein

2003: My Friend Rabbit by Eric Rohman

2002: The Three Pigs by David Wiesner

2001: So You Want to be President by Judith St. George; illustrated by David Small

2000: Joseph Had a Little Overcoat by Simms Taback

1995: Smoky Night by by Eve Bunting; illustrated by David Diaz

1993: Mirette on the High Wire by Emily Arnold McCully

1991: Black and White by David Macaulay

1984: The Glorious Flight: Across the Channel with Louis Bleriot by Alice Provensen

1983: Shadow by Claise Cendrars; translated and illustrated by Marcia Brown

1979: The Girl Who Loved Wild Horses by Paul Goble

1976: Why Mosquitoes Buzz in People’s Ears retold by Verna Aardema; illustrated by Leo and Diane Dillon

1975: Arrow to the Sun; a Pueblo Indian Tale by Gerald McDermott

1974: Duffy and the Devil retold by Harve Zemach; illustrated by Margot Zemach

1972: One Fine Day retold and illustrated by Nonny Hogrogian

1971: A Story, A Story; an African Tale retold and illustrated by Gail E.Haley

1970: Sylvester and the Magic Pebble by William Steig

1969: The Fool of the World and the Flying Ship retold by Arthur Ransome; illustrated by Uri Shulevitz

1966: Always Room for One More by Sorche Nic Leodhas; illustrated by Nonny Hogrogian

1965: May I Bring a Friend? by Beatrice Schenk de Regniers; illustrated by Beni Montresor

1964: Where the Wild Things Are by Maurice Sendak

1962: Once a Mouse — a Fable Cut in Wood retold and illustrated by Marcia Brown

1961: Baboushka and the Three Kings by Ruth Robbins; illustrated by Nicholas Disjakov

1959: Chanticleer and the Fox by Geoffrey Chaucer

1958: Time of Wonder by Robert McCloskey

1957: A Tree is Nice by Janice May; illustrated by Marc Simont

1952: Finders Keepers by Will; illustrated by Nicolas

1951: The Egg Tree by Katherine Milous

1950: Song of the Swallows by Leo Politi

1946: The Rooster Crows; a book of American Rhymes and Jingles by Maud and Miska Petersham

1945: Prayer for a Child by Rachel Field; illustrated by Elizabeth Orton Jones

1944: Many Moons by James Thurber; illustrated by Louis Slobodkin

1941: They Were Strong and Good by Robert Sawson