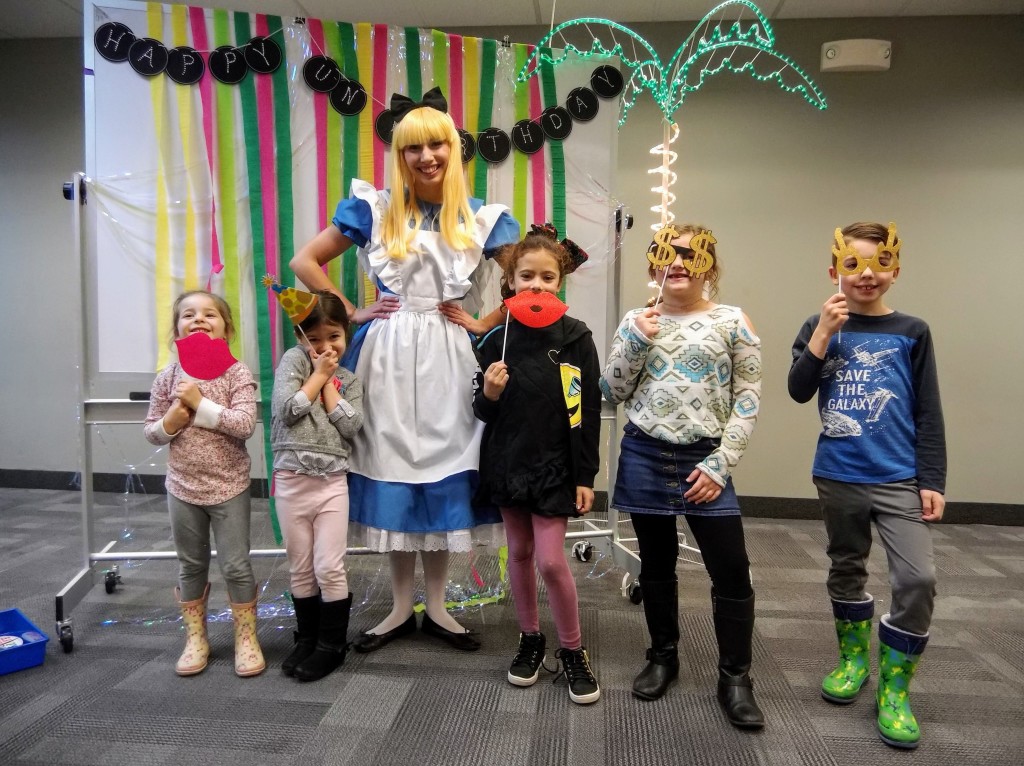 The Un-Birthday Party becomes un-stoppable when Alice shows up.

Games! Crafts! Alice in Wonderland! Cake! A piñata! We had everything but birthdays at our Un-Birthday Party.

As explained in Lewis Carroll’s Through the Looking Glass, an un-birthday is any day that’s not your birthday, which makes un-birthdays easy to celebrate. We had one on Monday at our Main Branch.

Celebrate Lewis Carroll’s birthday and your own un-birthday with these Wonderland facts.

Today is Charles Lutwidge Dodgson’s birthday, which is the opposite of an un-birthday.

You might know him better as Lewis Carroll, the writer of Alice’s Adventures in Wonderland and Through the Looking-Glass and What Alice Found There.

To celebrate Carroll’s birthday, here are five wonderful facts about Wonderland and its author.

Carroll first composed his nonsense Wonderland tales while taking the children of the Liddell family on a rowing trip. He was especially close to the youngest daughter, Alice.

In fact, it was Alice who encouraged him to write his story. In return, Carroll named his heroine after her. He even spelled Alice Liddell’s in an acrostic poem at the close of Through the Looking-Glass.

2. Carroll is best known for his literary works but his day job was as a mathematical lecturer at Christ Church.

He wrote a dozen mathematical treatises under his real name. However—while Alice has remained popular—it’s more difficult to find a copy of  A Syllabus of Plane Algebraic Geometry or An Elementary Treatise on Determinants, With Their Application to Simultaneous Linear Equations and Algebraic Equations.

3. Many classic Carroll characters and poems that we associate with Wonderland—for example, The Jabberwocky and Tweedledum and Tweedledee—come, instead, from Through the Looking-Glass.

The confusion most likely stems from movies and stage plays that use both books for inspiration.

4. Walt Disney adored Carroll’s work from the very beginning of his career.

Before Mickey Mouse, even before Oswald the Lucky Rabbit, Disney created a series of shorts where a live-action girl interacted with animated characters. The girl’s name? Alice, of course.

And, in 1936, Mickey Mouse starred in a short called “Thru the Mirror” that was influenced by both Wonderland and Looking-Glass.

However, it took decades before Disney figured a way to transform Carroll’s extraordinarily erudite tales into a visual story.

5. Carroll befriended many young girls during his life. He commemorated one, Gertrude Chataway, with an acrostic poem in The Hunting of the Snark.

In addition to composing them silly stories and poems, he often photographed or drew them—sometimes in the nude, which has rendered him retroactively controversial.

One final fact: You can borrow both Alice books from us. Actually, both Wonderland and Looking-Glass are in the public domain, so you can read them online right now.