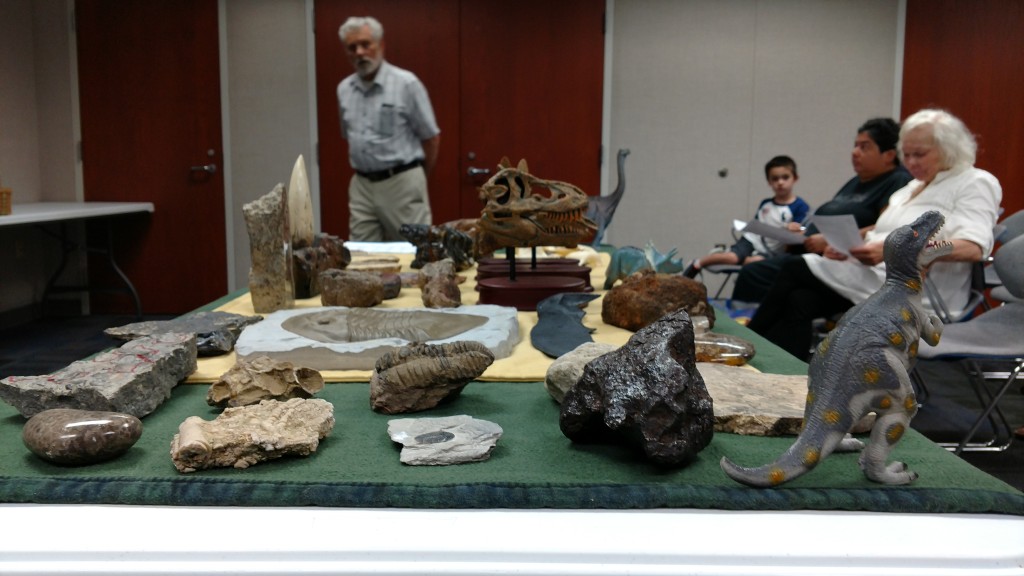 Bill Urbanski displays some of his fossil collection during a talk at Mentor Public Library.

Bill Urbanski, a docent from Cleveland Natural Natural History, visited us Monday to talk about some of the fossils found in Ohio.

And, while we couldn’t possibly share everything we learned, here are a few fun facts.

1. No dinosaur fossils have been found in Ohio yet: no bones, no footprints, no coprolites.

There probably isn’t a triceratops skull buried in your backyard or a hadrosaur hiding by the riverbed.

For most of the Mesozoic (the Age of Dinosaurs) and Cenozoic (the Age after the Age of the Dinosaurs), Ohio was above sea level and subject to weathering erosion. That means, instead of things getting buried and preserved, they were washed away.

Of course, that doesn’t mean there aren’t cool fossils buried in Ohio. They’re just older—often much older—than the dinosaurs.

2. Ohio—more specifically, the Cincinnati area—is famous for its Ordovician fossils, so famous that part of the Ordovician is called the cincinnatian.

Back then, our state was a warm shallow sea, similar to the modern Bahamas. (Think about that for a second.) It was a world filled with unfamiliar cephalopods, brachiopods, graptolites, and trilobites, a world so ancient that it predated fish.

Some of their fossils can still be found buried beneath the cul-de-sacs and strip malls of Cincinnati (and nearby Kentucky and Indiana.) However, most of their remains have been compressed into oil and gas and limestone.

3. If the Ordovician offered a Sea Without Fish, the Devonian (408-360 million years ago) was a world dominated by them. And one of the era’s most famous (and terrifying) fish was found in Cleveland.

Dunkleosteus was a monster by any era’s standards: 20 feet long; weighing a ton; with a bony, armored skull and a guillotine for teeth.

Dunk and its ilk, the placoderms (armored fish), are extinct. But it’s still nightmare fuel for those who visit it at the Cleveland Museum of Natural History.

4. However, the terrifying Dunkleosteur is not Ohio’s state fossil. That honor belongs to Isotelus maximus.

The trilobite could grow as long as 50 cm. And if that doesn’t sound very maximus to you, bear in mind that trilobites typically ranged from three to 10 cm long.

So discovering Isotelus maximus was a lot like finding a 5-foot rat or a 30-foot human.

5. Time has transformed the ancient animals of Ohio into some of our state’s most famous exports. Their carbon became limestone dating back to the Ordovician; natural gas from the Devonian; oil and gas from the Mississippian (360 to 320 million years ago); and coal from the Pennsylvanian and Permian eras (320 to 286 million years ago.)