Home/Lake Branch expanding thanks to generous donation
Previous Next 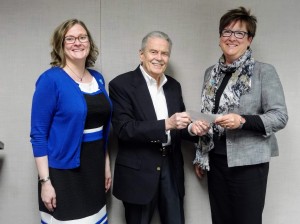 Mentor Public Library’s Lake Branch will receive a substantial upgrade and expansion this year – in large part thanks to the generosity of Francis “Bud” Paulson.

The Francis M. Paulson Irrevocable Trust of 1990 provides for the creation of the Beryl B. Paulson Memorial Endowment Fund, and the fund is donating $250,000 toward the project.

Lake Branch’s expansion will include the construction of another meeting room. This addition will be permanently known as The Beryl P. Paulson Annex and Meeting Room in honor of Paulson’s wife.

The new meeting room will make it possible for the Lake Branch to host more and bigger programs.

Beryl Paulson and Francis “Bud” Paulson passed away in 2005 and 2017, respectively. They actively used and supported Mentor Public Library throughout their lives.

Francis Paulson served on the library’s Board of Trustees from 1958 to 1966. His tenure included several important events for Mentor Public Library, including:

“The Paulsons’ gift is overwhelming in its generosity,” Mentor Public Library Executive Director Cheryl Kuonen said. “Every library is a reflection of its community, and extraordinary gifts like the Paulsons help the library accomplish extraordinary things.”