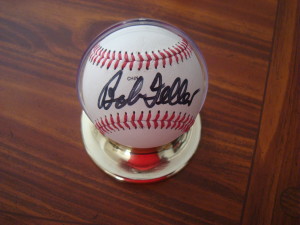 Cleveland Indians historian Scott Longert visited us earlier this week to talk about the Tribe from 1937 to 1942.

We can’t share every glorious anecdote. After all, that’s what his next book is for. But we can give you five fun facts from Longert’s Tribe talk.

The 1937 Indians had a murderer’s row for a starting rotation: all-star Johnny Allen; Mel Harder who won more than 200 games in his career; and a promising young guy named Bob Feller. You may have heard of him.

But that rotation was never quite as good on the field as it was on paper, mostly due to injuries.

Feller managed to dislocated his ulna while throwing a curveball during his first start of the season. It hindered him for two full months.

Meanwhile, Allen suffered from appendicitis and missed several starts. Ultimately, he managed to put together a remarkable season, going 15-1. That “-1” is an interesting story too.

Johnny Allen was 15-0 going into his final start of the 1937 season. He pitched a marvel of a game too and might have won if not for a muffed defensive play by third basemen Odell Hale.

Allen took umbrage to Hale’s error and tried to fight him after the game. Twice.

After the second fracas, manager Steve O’Neill forced Allen to sit next to him on the train ride home. And he managed to sooth his frazzled ace, in part by offering him $25 in gas money.

Rollie Hemsley was a great catcher — a 5-time all-star and World Series champion.

He was also a notorious alcoholic for the first decade or so of his career.

Before he joined the Indians in 1938, he was repeatedly kicked off teams or traded for his behavior while drinking.

One time, he picked a fight with three sailors who were on shore leave. And when police tried to break it up, he punched an officer and ripped off his badge.

Of course, he faced a battery of criminal charges, but the only one that made him mad was driving without a license. He had a license, he argued. He just lost it during the fight.

Hemsley’s story has a happy ending. He joined Alcoholics Anonymous while with the Indians and stayed sober thereafter.

Oscar Vitt became the Indians manager in 1938, and he was immediately unpopular. In fact, the team nearly mutinied against him in 1940.

But he was a known firestarter, even going back to his days as a player.

While a rookie with the Detroit Tigers, he almost got pummeled by Ty Cobb. You see, the rookie thought it was a good idea to heckle Cobb after he got picked off of second.

In 1938, the Come to Cleveland Committee organized a stunt in which Indians catchers Hank Helf and Frankie Pytlak would catch baseballs dropped from the Terminal Tower.

For context, the Terminal Tower is more than 700 feet high.

Miraculously, Helf and Pytlak each caught one.

The balls were estimated to be traveling 140 mph. When one bounced, it flew back up 30 stories.