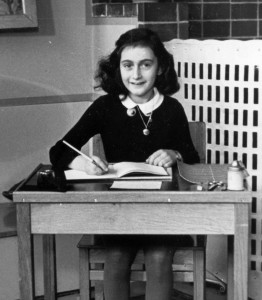 In recognition of International Holocaust Remembrance Day, all are invited to explore the historic Anne Frank House.

You can use virtual reality to tour the secret rooms where Anne and her family hid during the Nazi occupation of Amsterdam during World War II.

From Jan. 20 to Feb. 1, any of our patrons can stop by the Children’s Desk in our Main Branch to sign up for a time slot. To be clear, this virtual tour is open to all, not just children.

Anne Frank was a young diarist who was born a German national but lost her citizenship because of her family’s Jewish heritage. Her family lived in fear and hiding for years until they were apprehended in 1944. All the while, teenaged Anne kept a diary of her experiences. Of course, you are also welcome to borrow Anne’s Diary of a Young Girl from your local library.

By the way, one of our librarians happens to have earned a doctorate in German history, and he has offered several lectures on the Shoah and World War II, including: