Home/Talking about League Park with local authors
Previous Next 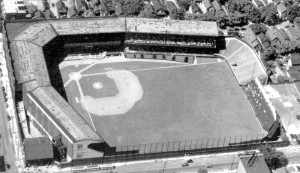 For generations, League Park has a nostalgic pull. It was the original home of the Cleveland Indians and the site of their first World Series victory.

Over the years, it hosted the minor league Cleveland Bearcats, Cleveland Buckeyes from the Negro American League, Western Reserve Red Cats college football team and the NFL’s Cleveland Rams. Later, the Cleveland Browns would use it as a practice field.

Most of League Park was demolished in 1951 but the memories remain.

Local authors and sports fan Ken Krsolovic and Bryan Fritz will talk about League Park during a special program at 6:30 p.m. on Monday, Feb. 11, at our Main Branch.

Afterward, copies of their book, League Park: Historic Home of Cleveland Baseball, 1891-1946, will be available for sale and signing.

By the way, if you love the Cleveland Indians, we have a lot of books and even a few videos that you’ll want to borrow.